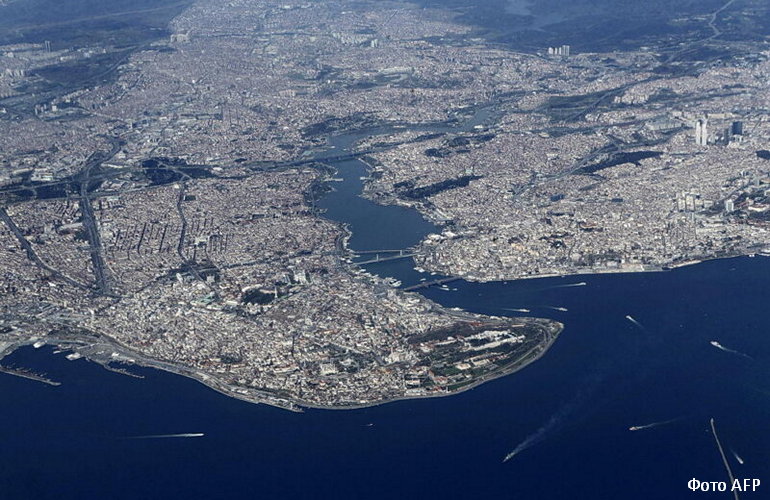 Experts: Andrii Mashchenko, director of LLC MBLS Law Firm; Sergii Korsunsky, a former Ukrainian ambassador to Turkey; Michael Petersen, director of the Russia Maritime Studies Institute at the U. S. Naval War College; Soner Cagaptay, author of the book “Erdogan’s Empire” - an expert on Turkey’s relations with the United States and others.

Turkish President Recep Tayyip Erdogan told NATO in May 2016 that the Black Sea was in danger of becoming a “Russian lake.” If other countries with Black Sea access did not act, he said, “history will not forgive us.”

Now, more than three years later, Russia’s control over the Black Sea has only strengthened. Russia has taken every opportunity to expand its dominance, piece by piece, at the expense of other states in the region, especially Ukraine, which remains under attack by Russia.

Observers say that Turkey is the only country on the Black Sea that can challenge Russia’s growing control. Yet Turkey appears to have focused its resources in the Mediterranean, the Aegean Sea and the Middle East at the expense of its presence in the Black Sea.

Ankara has also seen a major rapprochement with the Kremlin across multiple areas. Analysts say this may let Russia further consolidate its power in the region, allowing it to take advantage of Ukraine and also Turkey.

“Instead of attempting to balance Russian power in the Black Sea and the Middle East, Ankara has begrudgingly opted to cooperate with Moscow, accepting its dominance,” wrote Iulia Joja, a researcher at the Johns Hopkins School of Advanced International Studies.

This makes for a complicated scenario for Ukraine, with which Turkey has decent relations. Trade between the two countries, while down to about $4 billion per year from $8 billion in 2014, has been growing. The two countries have a visa free regime, are cooperating on defense projects and looking to sign a free trade agreement. And Turkey has consistently refused to recognize Russia’s illegal annexation of Crimea and has at times intervened on behalf of Crimean Tatars, an oppressed Turkic minority under the Russian occupation.

However, Russia’s growing might threatens Ukraine as well as other littoral states of the Black Sea, observers say. They add that Turkey should not discount the threat from Russia, which sees the Black Sea as a launch pad for projecting force into the Mediterranean.

“The Turks should not forget that the Straits — the Bosphorus and the Dardanelles — have always been the goal of the Russian Empire,” said Andrii Klymenko, project head at non-governmental organization Maidan of Foreign Affairs and a Black Sea expert from Crimea.

Watchdogs have identified two other problems between Ukraine and Turkey in the Black Sea. One is the pending TurkStream pipeline, which, along with NordStream 2 in the Baltic Sea, threatens to make Ukraine irrelevant as a gas transit country.

And some vessels continue to travel illegally between Turkish ports and the ports of Crimea. While these vessels are forbidden from doing so, they get around it by falsifying their origin or destination documents. This violates Ukraine’s sovereignty and causes economic harm.

“Turkey’s security policy has a direct impact on the economy of Ukraine,” said Andrii Mashchenko, a maritime lawyer with the MBLS Law Firm in Kyiv. “The domination of the Azov-Black Sea basin has allowed the Russian Federation to effectively block the operation of Ukrainian Azov ports, corresponding to a decrease in Ukrainian trade.”

Russia has created substantial obstacles to navigation in the Kerch Strait, along with artificial delays for ships. The Kerch Strait Bridge, built by Moscow after the Crimean annexation, limits the size of ships able to pass through. Russia had also seized Ukrainian warships in international waters near the strait. The Ukrainian navy expects Russia to continue consolidating its capabilities to strike Ukrainian shores.

Klymenko wrote that Russia also threatens Ukraine’s main export routes, which run through the Black Sea, between the ports of Odesa, Mykolaiv and Kherson, to the Bosphorus strait. These routes pass by the Odesa Field offshore gas platform, which has been seized by Russia. Russian forces may decide to detain Ukrainian vessels to “protect” the platforms their country seized.

“If Russians turn [the Black Sea] into a Russian sea, it’ll be very bad for our external trade,” agreed Sergii Korsunsky, a former Ukrainian ambassador to Turkey.

Ukraine also lost much of the oil and gas deposits in the Black Sea, and Russia’s continued control denies Ukraine the opportunity to explore and exploit the region’s unproven reserves, estimated to be substantial. The tense situation in the region also discourages foreign investment in gas exploration, already low due to widespread corruption in Ukraine’s domestic energy sector.

During several naval exercises conducted this summer, Russia closed off significant parts of the Black Sea. The total area shut off by the Russian Navy in July 2019 was 120,000 square kilometers, more than a quarter of the sea’s total area, according to a report by Klymenko’s Black Sea News and the Black Sea Institute of Strategic Studies.

The Black Sea has long been a “Turkish-Russian condominium,” as Turkey and Russia are the only nations with sizable navies there, according to Soner Cagaptay, author of the book “Erdogan’s Empire” and an expert on Turkey’s relations with the United States. Turkey is quite happy with this status quo, he said, unless Russia tries to increase its naval presence.

Turkey’s acquisition of Russia’s S-400 missile system and both countries’ presidents’ deal on Syria were just the latest examples of increasing cooperation. While it is currently in Turkey’s interest to maintain a good relationship with Russia for multiple economic and security reasons, many observers find that Russia’s increasing control in the Black Sea comes at Turkey’s expense.

According to George Visan, an associate researcher at the Romania Energy Center, the Turkish navy has always split its forces between the Black Sea and the Eastern Mediterranean, with disputes with Greece and Cyprus being its main priorities. However, the Black Sea should not be neglected.
“Crimea is the springboard for Russian naval operations in the Mediterranean Sea, which negatively impact Turkish security,” Visan wrote in an email. “Russian-Turkish cooperation doesn’t really promote Ankara’s interests in the long run.”

Anna Borshchevskaya, a senior fellow at The Washington Institute, agreed, saying Putin has been setting a trap for Turkey and bilateral relations between the two countries are tipped toward Russia. “Erdogan simply realizes he’s in a weaker position or perhaps he may not realize just how deeply he has fallen into Putin’s trap,” she said.

Joja wrote in an email that “Russia is gaining more control of the Black Sea every year to the detriment of Turkey” and that the Kremlin’s weaponization of Crimea also limits Turkey’s access. While the relationship between Turkey and Russia has warmed significantly since Nov. 2015, when Turkey shot down a Russian jet over Syria, Russian offensive assets in Crimea can now reach Turkish territory.

Former Ambassador Korsunsky says that Ukraine should be attempting to convince Turkey that Russia can act against its interests in the Bosphorus. But so far, that has proved unsuccessful, he said.

While Turkey has stated that one of its goals is to modernize and increase its naval forces in the Black Sea, many are skeptical.

“The Turkish Navy has not been very active in challenging Russia’s attempts to tighten its grip on the Black Sea, whatever Turkey’s official Naval Strategy might say,” Michael Petersen, director of the Russia Maritime Studies Institute at the U. S. Naval War College, wrote in an email. “The reasons for this are a mystery to me.”

Last week, Russia’s Gazprom began filling part of the TurkStream pipeline with gas. This segment runs under the Black Sea. Russia said it would launch the pipeline by the end of the year. TurkStream is one of Russia’s moves to bypass Ukraine.

“TurkStream is a very bad story, it’s a disregard of our interests,” said Korsunsky. “We put effort into telling Turkey how this hurts us… they knew we were against it and it was bad for us.”

Petersen wrote that Russia’s policy of isolating Ukraine may boost Turkey’s economic integration in the region.

“While presidents Zelensky and Erdogan are attempting to work out agreements on trade, transportation, and energy, it appears that Turkey is in the driver’s seat, in part because of Russia’s efforts to isolate Ukraine,” he wrote.

According to monitoring groups, ships going from Turkish ports to Crimea remain a constant problem, with Black Sea News reporting 96 such trips in 2018. Turkish ship-owners were among the most frequent violators after Russian ones, although the number of infringing Turkish-owned vessels declined significantly since 2014.

Following pressure from Ukraine, the Turkish Chamber of Commerce circulated an advisory to disallow ships arriving from Crimea into Turkish ports or vice versa. However, Turkish ports have not carried out sufficient oversight, which allows violations to continue. Ships leave port under false pretenses, often use fake documents and turn off their automatic identification systems prior to entering Crimean ports.

“We did everything we could,” said Korsunsky. However, he added, Ukraine ultimately received the same response: “We do not allow it to happen… They are violating not our Turkish laws, but your Ukrainians laws. You arrest them.”