Mess-up in the seaports of Ukraine proceeds. The courts support 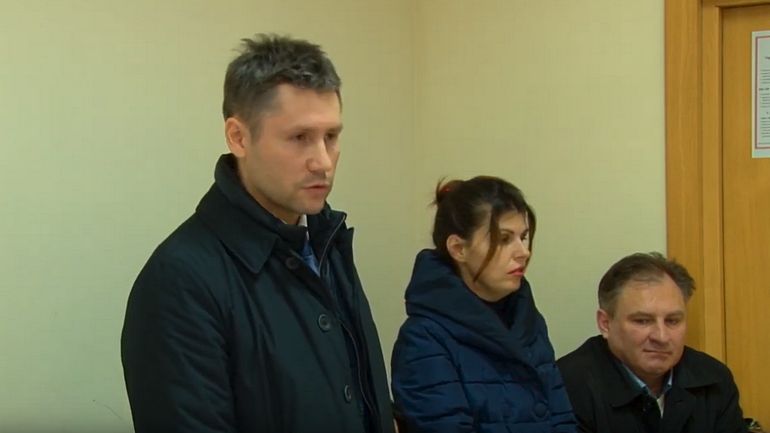 Andrii Mashchenko (director of MBLS law firm) took part in consideration of the case in the District Administrative Court of Kyiv. The court considers the claim of the Association "Marine Chamber of Ukraine" to the State Service of the Sea and River Transport of Ukraine (Maritime Administration) and the Ministry of Infrastructure of Ukraine. The claimant requests to: recognize as illegal the Maritime Administration’s actions which held a competition for the placement of as they sad "vacant" posts of captains of seaports of Ukraine; and to oblige the Ministry of Infrastructure to refrain from appointing to posts the winners of mentioned competitions.

Despite the public resonance and the lack of understanding by the international maritime community of the situation with the simultaneous operation of two captains in seaports, the Ministry of Infrastructure for half a year did not explain its position at all about what is happening.

As previously reported by "Ukrrudprom", the District Administrative Court of Kiev is considering a claim of the Association "Marine Chamber of Ukraine" to the Ministry of Infrastructure and the Maritime Administration of Ukraine (the morad) regarding the recognition illegal actions and the obligation to refrain from committing certain actions.

The reason for appealing to the court was the illegal actions of the Maritime Administration to conduct competitions for vacancies with the strange name in October-November 2018 "Deputy Head of the Department - Head of the Department of State Control (Supervision) for Maritime Safety and Diploma Passport and Administrative Services in the Field of water transport in (hereinafter the name of the seaport) port - the captain (name) of the port of the Black Sea Interregional Department”.

At the same time, in the structure of the Administration of the Seaports of Ukraine duly authorized captains of seaports continue to work. These captains have powers provided for in the Code of Merchant Shipping (CTS), other legislative and normative acts of Ukraine and international conventions.

Already about 500 captains of foreign ships, who came to the ports of Ukraine, encountered such an absurdity.

About the situation with the "double" captains of ports are already known abroad. The Marine Chamber of Ukraine already received a request from one of the leading P&I club, who asked to comment on which instructions of two captains must to comply.

The Marine Chamber's claim is considered by the Judge Fedorchuk A.B. , case number 640/ 20542/18, without the call of the participants in the order of simplified proceedings.

Interesting incident has happened with this case. Each court case has its own unique number, which cannot be repeated. The Code of the District Administrative Court of Kyiv is 826 (the first three digits of the case number). The number under this code number 826/20542/18 is indicated in the text of the "paper" versions of court orders. But the Court Decisions Registry has a court code of 640, which is the code of the Kyiv District Court of Kharkiv and the Register contains information about two different cases with one number at the same time.

The grounds for considering the case in the order of simplified proceedings are indicated in Article 257 of the Code of Administrative Proceedings of Ukraine.

When deciding to consider a case in the form of a simplified proceeding, the court must take into account, among other things, the importance of the case for the parties and it significant public interest.

The Marine Chamber has filed a motion for consideration of the case on the call of the participants. January 23, 2019 Judge Fedorchuk A.B. refused to satisfy this motion.

Nevertheless, on March 11, the meeting with the call of the participants took place, because the petition for the entry into the case as a third party has filed the captain of the Kherson sea port Ivan Efimenko and this petition was considered.

More about this court hearing in a video of our Odessa colleagues:

And on March 12, Judge Fedorchuk passed a ruling refusing to comply with the Marine Chamber's request to secure a claim.

The Maritime Chamber requested that the captains, according to the version of the Maritime Administration, be prohibited from taking actions to implement the powers of seaport captains provided for by the Code of Merchant Shipping, the Law "On Seaports" and the Regulations on the Captain of the Seaport. And also to oblige the State Service of Marine and River Transport of Ukraine (Maritime Administration) not to impede the captains’ of all 13 seaports of Ukraine, appointed by orders of the Ministry of Infrastructure, activities until the dispute resolved on merits by the court.

It is stated in the court ruling that "the circumstances, indicating the obvious danger of causing damage to the rights, freedoms and interests of the plaintiff, are not proved by the plaintiff", and also: "In addition, there are no evidence in the court file and confirmation that the failure to apply provisional remedies may complicate or make impossible further enforcement of the court’s decision”. 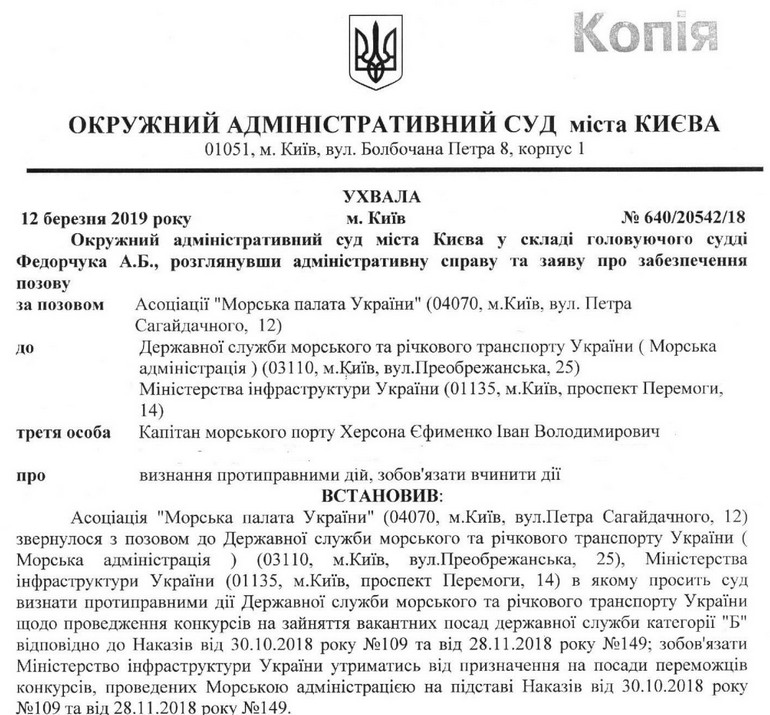 But Article 150 of the Code of Administrative Proceedings of Ukraine provides another reason to secure a claim. It is: "obvious signs of wrongfulness of a decision, actions or inaction of a body of power."

In addition, taking the case into consideration, the judge himself indicated that it would be considered within 60 days, but 104 days had passed. "Dual power" continues and therefore very likely sanctions of the International Maritime Organization will be imposed on Ukraine.

And there is still no official position of the Ministry of Infrastructure.

At the same time, while the administrative court on all grounds drags up the case, the Marine Chamber initiated a public examination.

The National Agency of Ukraine on Civil Service has already agreed to such an examination and issued an appropriate order where identified the responsible person for interaction with the MCU.

But the Marine Administration opposes and argues that the subject and purpose of this public examination go beyond the competence of the civil society institution.

And about how the values of civil society are understood in the Maritime Administration, on March 11, their representatives categorically denied the participation of the media in the above-mentioned court hearing.

Why a so absurd "reform" was needed, become clear when you think over creation of the State Enterprise "Service Center for Marine and River Transport". This company was registered on November 9, 2018 (at the same time when illegal competition was held). The authorized capital of this company is 0 UAH. And this company will provide services for "free tariffs", which under the law is the competence of only captains of ports.

The Captain of the Odessa port Mr. Alexander Antonov commented on his page in Facebook:

"A few more questions regarding the "reforms" of the Maritime Administration. Someone saw somewhere in the legislation of Ukraine (for example, in the Code of Merchant Shipping of Ukraine), the authority of the State Enterprise "Morrichservice" to perform the functions of the Captain of the sea port?

Officially, they receive a fee for the performance of functions (called "Services"), which are imposed by the Law on the Captain of the sea port! There are only two explanations for this, and both testify to the crime: